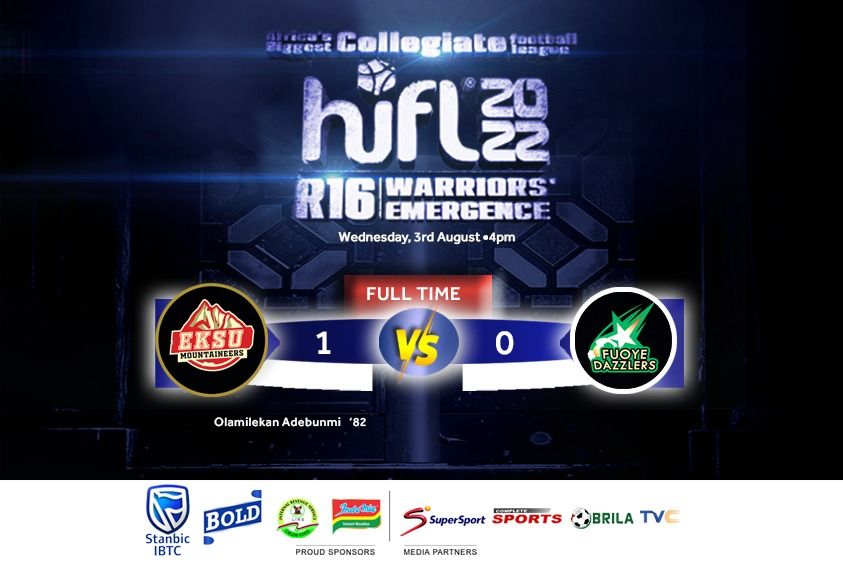 EKSU Mountaineers drew first blood in the ‘Ekiti Derby’ when they beat FUOYE Dazzlers in the first leg of their HiFL 2022 round-of-16 tie on Wednesday.

The Ekiti State University team led by Babajide Oyewumi impressed their fans during the group stages of HiFL 2022, finishing top of Group D ahead of UNILAG Marines, OAU Giants, ABUAD Stars and others.

Fuoye Dazzlers were equally impressive, beating LASU Blazers, UI PioneerS, Lead City Gladiators, and others to the top spot of Group C and securing their spot at the knockout stages of the competition.

The tactical brilliance of both teams was on display with assured defending from both sets of players. The two teams were familiar with each other and matched every attempted dribble with a similarly brilliant tackle.

Hundreds of spectators were present at the Ekiti State University Sports complex and the game seemed set to end in a stalemate before Olamilekan Adebunmi broke through the FUOYE Dazzlers defence and found the winner in the 82nd minute.

FUOYE Dazzlers under the management of Coach Blessing Adeleye will look forward to turning the tie on its head when they welcome their state rivals to the Federal University Oye-Ekiti for the return leg of this Last 16 tie on the 17th of August 2022.